In today's world, our servicemen and women are serving across the globe. It is important to show how we, as a community, support all their efforts and sacrifices. Memorial Day is a special time to recognize the serviceman and women who have given their lives for you and me.

The Penndel-Hulmeville Memorial Day Parade was founded with the intent to honor those who work to defend our beautiful country. We strive to help teach future generations about the servicemen and women who defend our great nation. It is important that we take the time to remember the sacrifices they have made and this is our way of showing our community’s appreciation.

The Penndel-Hulmeville Memorial Day Parade Inc. is a registered 501c3 with the IRS, as well as a registered non-profit corporation with the Dept. of State in the Commonwealth of PA. The parade was incorporated in 2002. 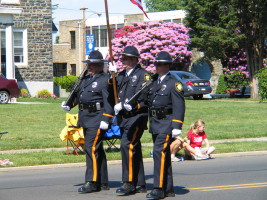 In March of 1995, Ed Preston and Joe Comisky of Boy Scouts Troop 82 began working with the American Legion Memorial Post 436 on several civic events, including the post’s Memorial service and placing American Flags on graves of veterans. Using these events to show support of the legion’s activities, the two scouts wanted to make the veterans aware that people were willing to help them promote patriotism in Penndel and Hulmeville.

The two scouts suggested restarting the Memorial Day parade, but the members of the American Legion, which had sponsored the parade in the past, expressed concern about community support.

In June of 1996, Ed Preston went to Penndel Borough Council and suggested a revival of the parade. There was unanimous support from the borough council, who thought it was time to have a parade through the towns again. The next month, Mr. Preston went to the Hulmeville Borough Council and presented the same plan and they thought it was a great idea. Ed also contacted the Hulmeville Historical Society and asked for their help. Among these three organizations, Ed was given a tentative commitment for approximately $2,100.

Because of the support of both borough councils, in October of 1996, Ed convened a meeting with about 24 residents from the two communities. Thus, the Penndel-Hulmeville Memorial Day Parade Committee was born. The committee initiated fundraising activities that same evening. Meeting every month, the group searched the Lower Bucks County area for bands, performing groups, and anyone who would help finance the parade.

On May 24, 1997, the parade march out from Ford and Main Streets in Hulmeville, taking the traditional route and ending at American Legion Post 436 where the post memorial service took place.

With nearly 700 participants and 1500 spectators, the rebirth of the Penndel-Hulmeville Memorial Day Parade was a huge success!

On May 23, 1998, the parade again took place, ending this time at the Penndel Memorial Recreation field in Penndel, where the Penndel Wildcats provide the marchers with hot dogs and soda.

Again the reborn Memorial Day parade was enthusiastically supported in both communities!